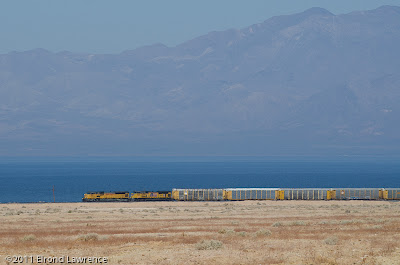 Dwarfed by the Santa Rosa Range, UP 8121 leads a train of eastbound autos into Bertram siding beside the Salton Sea on June 11. (click pics to enlarge)
In early June, Mike Roque and I made a long-planned Southern California road trip to visit the Salton Sea and Union Pacific's busy Sunset Route. We spent the first day photographing nearby San Timoteo Canyon and Beaumont Hill, then motored east on I-10 and old U.S. 99 to Indio. For the next two days we followed trains through this stark and alien land in the Imperial Valley, with brief stops at some of the quirky towns that surround this accidental lake.

Created over a hundred years ago when Colorado River levees burst, the Salton Sea is California's largest lake. It covers more than 375 square miles and is 25 percent saltier than the Pacific Ocean. Overeager developers, hoping to duplicate the success of nearby Palm Springs, billed the Salton Sea in the 1950s and 60s as a winter playground for fishing and speedboat fans, but the breathless marketing never quite took hold: a changing shoreline, hurricane-driven floods, algal blooms and massive fish die-offs dashed those dreams. Fisherman and boating fans still flock to the saline lake, but Salton City, Bombay Beach, and other shoreline towns are shadows of their old selves. 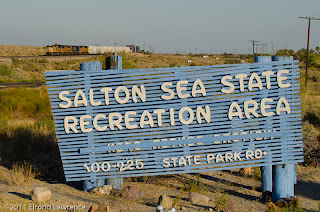 A westbound passes the state park entrance sign at Mortmar.
Surprisingly, the Salton Sea has emerged as one of the country's most important migratory bird habitats. Millions of birds representing more than 400 species can be spotted here, thanks to nearby fields, a prolific fish population, and the sad fact that there are few remaining wetlands in Southern California. Efforts are underway to restore this dying sea, but its future is by no means secure.

On the other hand, the future of the old Southern Pacific "Sunset Route" is brighter than ever; a key reason for our trip was to document the single track mainline and vintage searchlight signals before UP double-tracks the route. Happily, we pulled off the trip before the extreme summer heat kicked in -- 103 degrees is much easier to handle than 116! 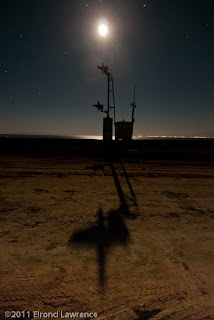 One of my favorites from a great June 10 evening -- a nearly full moon casts the shadow of a searchlight signal at Bertram siding. In the distance lies the Salton Sea and the lights of Salton City. 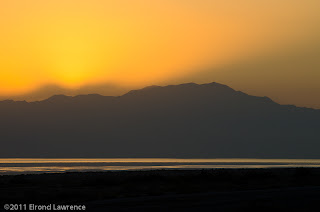 Light and shadows dance over the Santa Rosa Mountains moments after sunset. 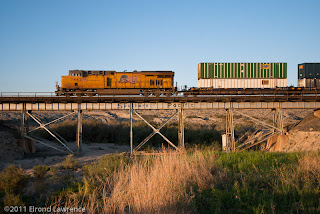 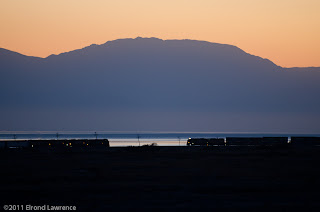 In rapidly fading light, two UP trains meet beside the sea at Bertram.
For more photos, visit my Facebook album by clicking HERE (you don't need to be a FB member). To learn more about the Salton Sea, visit www.saltonseamuseum.org or www.saltonsea.org. Watch for upcoming posts about our visit to Salvation Mountain and the restored North Shore Yacht Club.
Posted by Elrond Lawrence at 10:33 PM No comments: