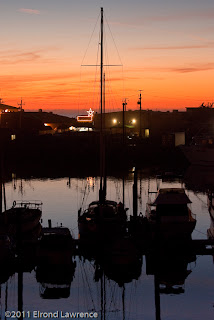 Moss Landing Harbor at sunset in January 2011. The distant "star of lights" marks Phil's Fish Market; behind that, the Pacific Ocean. (click to enlarge photos)

[UPDATED JANUARY 18, 2011] Halfway between Monterey and Santa Cruz is a little piece of California that time forgot: the quiet harbor of Moss Landing. Monterey Bay's best-kept secret is still largely undiscovered by tourists and longtime Californians -- people are typically outnumbered by sea lions and fishing boats -- but the word is getting out. A big contributor to that buzz is Phil's Fish Market, which had a starring role on the Food Network a few years ago and quickly landed on the "must-dine" list for Central Coast vacationers. 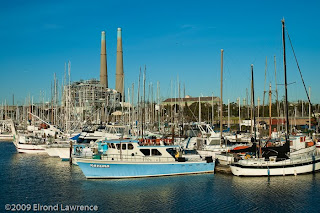 Colorful boats rest in the quaint harbor, set against the towering stacks of the Moss Landing power plant.
Phil's restaurant is only part of Moss Landing's charm. An amazing variety of birds and marine life call the harbor home; Elkhorn Slough also meets the Pacific Ocean here, so kayakers and pontoon boats are a common sight along the pristine old river and surrounding wetlands. Highway 1, antique stores, and a landmark power plant add to the photographic possibilities. 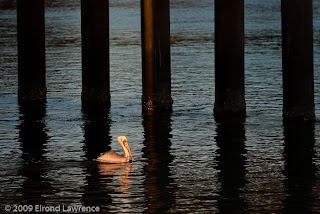 One of Moss Landing's resident pelicans relaxes in the shadow of the Highway 1 bridge. 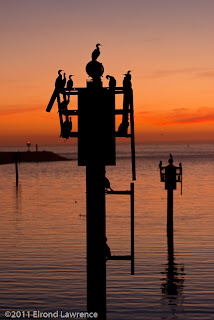 Seen from Highway 1, birds perch near the harbor entrance at sunset in January 2011.
Moss Landing has always been a favorite place to take the cameras, and with our move to Oak Hills we're only 15 minutes from the harbor! Gloomy Central Coast summers put a damper on picture-making, but the spring and fall months offer plenty of sun. Gotta run -- Phil's is calling. Mmm, calamari . . . 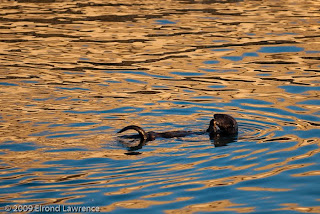 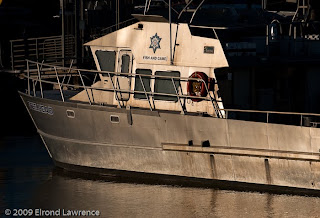 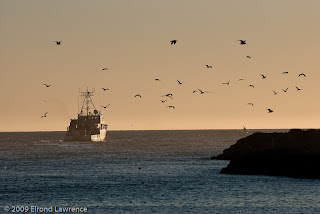 Near sunset, a research vessel departs Moss Landing for the waters of the Pacific.
For more information on Moss Landing,visit the Chamber of Commerce: http://www.mosslandingchamber.com/index.html
Posted by Elrond Lawrence at 8:00 AM 1 comment: 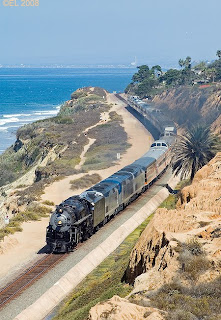 I couldn't drive south last weekend to chase Santa Fe no. 3751 on her third trip to San Diego, but a scan through the files reminded me how fortunate I was to chase her inaugural 2008 trips along the Pacific. The 1927-built Baldwin will steam to San Bernardino, Cal., on May 8-9 as part of National Train Day and the city's bicentennial "railroad days" event at the former Santa Fe station. I'll be there Saturday to cover her arrival from LA and sign copies of Route 66 Railway (believe it or not, the first printing is down to under 100 copies).
Can't wait to get a 3751 "fix" . . . for now, here are a few photos of my favorite 4-8-4 from her travels on the Surf Line in 2008. (click photos to enlarge). 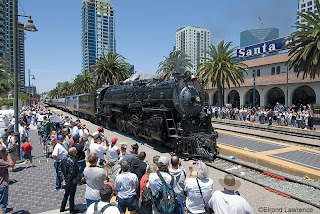 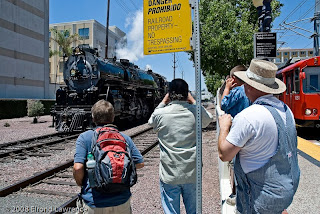 Fans document the historic return of 3751 to San Diego. 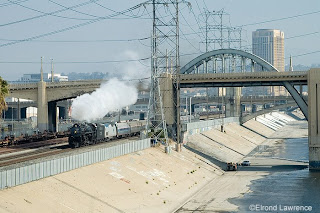 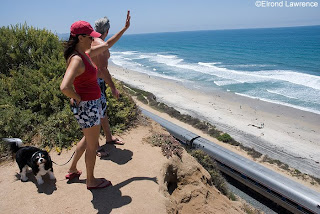 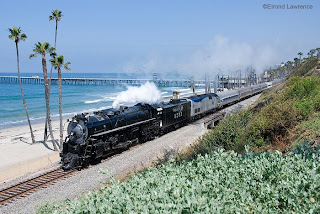 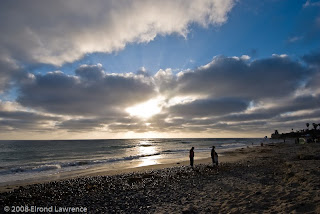 While driving south to San Bernardino in February for a book signing, I was able to bypass the usual mind-numbing I-5 route in favor of highway 99, the Tehachapi mountains, and U.S. 395. While I can't match friend David Styffe's epic 13- and 14-hour drives between Fullerton and Modesto, this one came pretty close. A lack of trains and a gauntlet of storms kept me moving all the way past Bakersfield, but suddenly the clouds began to break up and an ongoing parade of "storm light" moments provided plenty of opportunities. In no particular order, here's a selection from the drive south on Friday, February 5. (click photos to enlarge) 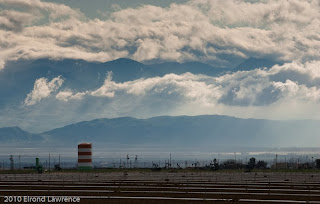 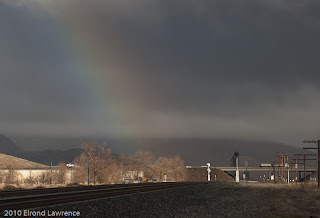 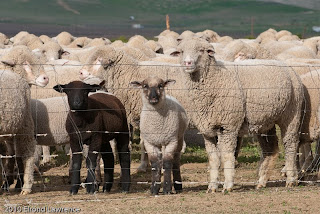 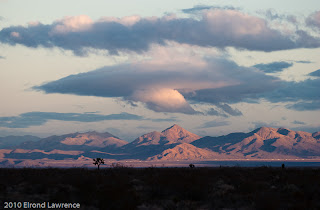 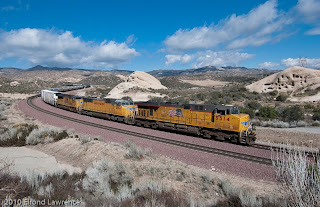 Finally, some sunny skies for the drive home (and a train in nice light!). UP 5514 West rolls through the curves in Cajon Pass, seen from Highway 138 on February 7. It's Super Bowl Sunday and I'll be home in time to see the New Orleans Saints complete their first Bowl victory.
Posted by Elrond Lawrence at 5:35 PM 1 comment: 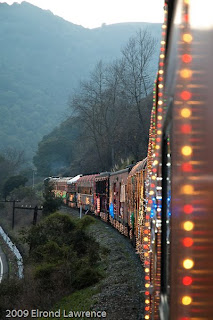 (With apologies to the great U2 song)

First, I don't know which is sadder... that it took three months to update this #$@! blog or that I'm doing this post in a La Quinta Inn the night before Winterail. The chief reason: we realized the American dream by becoming homeowners again, buying a house in Monterey County. But before any more time passes, here's a post to get the blog back in action.

The weekend after Christmas, I drove up to the Niles Canyon Railway to check out their annual Train of Lights. It was well worth the time -- what a spectacular sight. It's easy to see why this holiday tradition has become wildly popular over the years. Powering the train was 1956-built SD9 No.5472 in gorgeous Southern Pacific "black widow" colors.

Below are a selection of photos from the impromptu ride -- thanks to Dave Hensarling, Dave Roth, and the rest of the Golden Gate Railroad Museum gang. For more information on the railway, visit the Niles Canyon Railway and GGRM sites. Special steam weekends will take place in March, with more events planned in 2010. Upper left photo: cruising down Niles Canyon from Sunol (click photo to view) 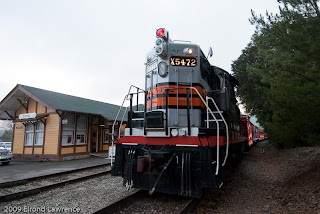 SP "Cadillac" 5472 idles beside the Sunol depot before helping the next train descend the canyon to Niles. (click photos to enlarge) 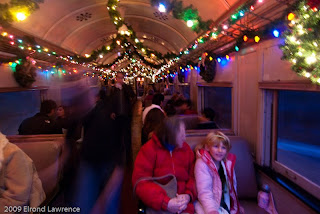 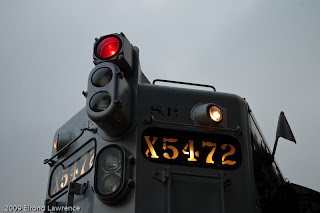 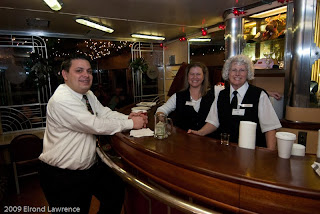 Dave Hensarling, president of GGRM, poses with the friendly crew of SP No. 2979, the museum's beautifully-restored Art Deco lounge. 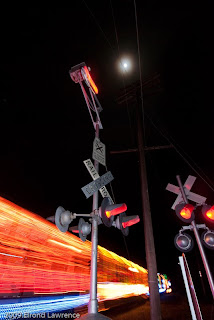 A streak of blinding light, the holiday train rolls past the crossing near Brightside yard. 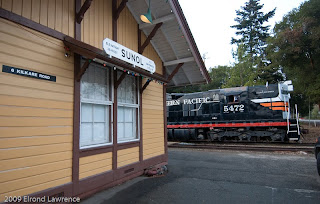