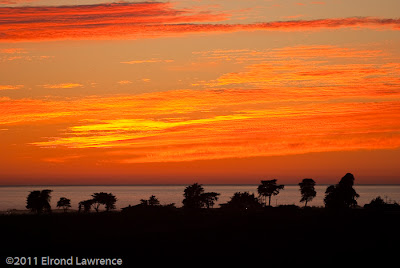 Sunset from Highway 1, January 28, 2011 (click photos to enlarge)
So far, 2011 has delivered an amazing winter. While much of the country is buried in snowdrifts, we're experiencing weeks of sunshine with temps frequently in the 60s and 70s (at this point I should duck to avoid the incoming fleet of snowballs). Since early January I've been driving to Kat's school near Watsonville to pick her up from drama rehearsals, and the timing for pictures couldn't be better: three times a week I pass through Moss Landing and neighboring Elkhorn Slough around sunset.

On one recent drive, the sky lit up with a dazzling show of color; the view was so hypnotic that I nearly drove into the slough! Coming to my senses, I pulled over to snap a few pictures (above). Glancing south toward Moss Landing, I spotted an exquisite scene in the gathering darkness (below). Layers of fog rose from the ground while a ribbon of cloud seemed to brush the smokestacks of the power plant.

Hmm, this winter thing isn't so bad in Monterey County . . . 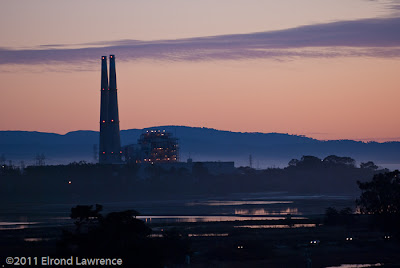