Odds N' Ends at the Dawn of July 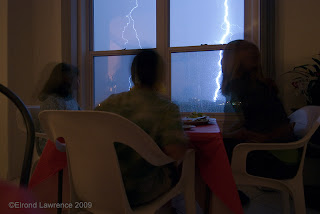 Fireworks, Florida style. Watching in awe are (L to R) Natalie Scott, Gregory Scott and Kat. Thanks to friends John and Debbie for dinner and a show. (click photo to enlarge)

FLORIDA: Okay, after visiting friends in Sarasota, I'll admit my long-held belief that Florida has nothing of interest is as misguided an idea as I've ever had (and there have been plenty, believe me). We were greeted by an outrageous lightning storm, toured the Ringling Museum, drank Key West brew, road-tripped to Anna Maria Island, ate alligator and Salty Dogs . . . and had the best steak of my life at Bern's in Tampa (thanks to my loving family for a killer Father's Day gift!). 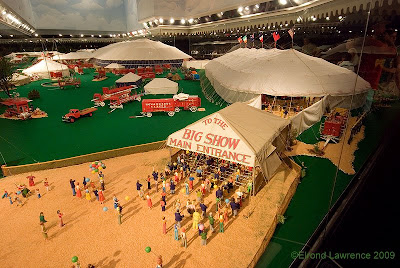 The world's biggest miniature circus -- yes, I appreciate the irony.
The humidity was thick, but not as bad as New Orleans. Another landmark moment: we finally ate at a Steak n Shake, that vaunted cathedral of cholesterol revered by Midwest railfans. The next evening, while driving home from San Jose we stopped at an In-N-Out, thereby completing the holy grail for burger aficionados. 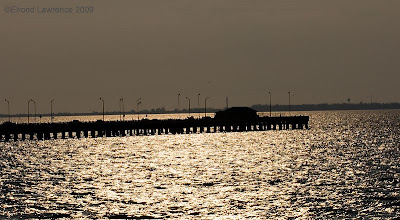 HEMMINGS MOTOR NEWS REVIEWS R66R: A large envelope arrived Friday with pages from the August 2009 issue of Hemmings Motor News, a major car collector magazine . . . and a review of Route 66 Railway! Editor Jim Donnelly gives the book 3 of 4 stars ("Worth Reading") and adds that more car photos would have easily earned the "artful" book a fourth star. (They are a car magazine, after all . . .) Donnelly noted that "the vaunted tale of Route 66 has been told on paper and celluloid innumerable times, but not like this." Check out Hemmings' website at http://www.hemmings.com/.

UPCOMING EVENTS: Plans are in the works for book signings at Route 66 Days in Flagstaff, Arizona, and the Route 66 Rendezvous in San Bernardino, Calif. Both events will be in September . . . more details as they shape up.
RAILROADS OF CALIFORNIA BOOK: Author-photographer Brian Solomon has released his latest book, Railroads of California. It's a beautiful hardcover featuring photos of classic and contemporary trains across the Golden State. His writing and photography are at their usual top-notch form, and I'm pleased that he used a few of my photos. It's available at online retailers like Amazon and Karen's Books, plus hobby shops, etc.
MORE BOOK STUFF: Planning has begun for a second R66R printing, with a mid-July meeting at LARHF to plot things out. The trip to Southern California will also include a brief road trip to shoot material for the next book idea (God help us). No details yet since the idea is still evolving . . . stay tuned.
Posted by Elrond Lawrence at 4:46 PM 2 comments:

A Deal to Die For

While visiting my home town of Fontana, Calif., a few days ago, we stumbled upon this funeral home "special" along Sierra Avenue. Sure, other shots from the trip are better but I couldn't wait to post this gem: 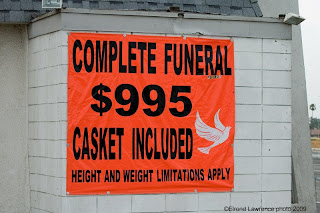 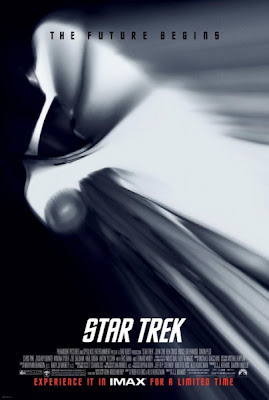 "Space is disease and danger, wrapped in darkness and silence." -Leonard "Bones" McCoy.

I've been meaning to update the blog with some thoughts about Star Trek, the movie we've been awaiting for 2-plus years. Well, now that Kat and I have seen it four times and the movie has passed $225 million in box office . . . there's not much left to say but "wow." Director JJ Abrams, writers Roberto Orci and Alex Kurtzman, and all of the amazing cast knocked this one out of the park.

One movie a year gets this kind of attention from the Lawrence family. On opening night, Kat and pals Sydney & Alyssa were photographed for the online version of the Salinas Californian: http://tinyurl.com/create.php (hopefully it remains online a while). We tried to catch the IMAX Trek show during its 2-week run, but the only close screens were the lame "Mini-max" versions in San Jose. However, friend Rob Curtis came to the rescue last week during a visit to Southern California . . . he spotted a 9:40 "encore" showing at the Edwards IMAX in Ontario, Cal. We happily joined the Curtis family for two hours of amazing visuals and sound. If you can find a real IMAX show, it's easily worth the extra dough.

The best way to sum up the last month is this: A) finally, Trek is cool again, B) finally, optimism and fun are cool again, and C) this is the best I've felt to be Trekkie in almost 20 years. Special shout-out to TrekMovie.com, my favorite site for daily news and interviews. Is it too early to start counting down for the sequel?