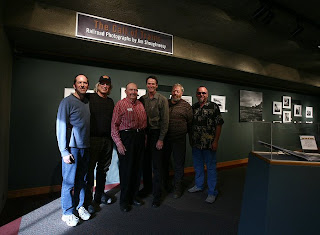 From left: El, Ted Benson, Jim Shaughnessy, Jeff Brouws, John Gruber and David Styffe at the California State Railroad Museum in Stockton, the day after Winterail. The Shaughnessy photo exhibit will continue at the museum through August 16. (Scott Lothes photo - click to enlarge)
The dust has finally settled after a whirlwind month that saw a six-day trip of book signings and talks followed by a weekend selling books at Winterail in Stockton -- a town famously referred to by railfan Donald Gill as "The Paris of the great Central Valley of California." We had an amazing day with Route 66 Railway book sales . . . that evening, the "Route 66 Rails" multimedia show played to a crowd of 1,000 rail photography fans. Several big talents who helped with the book were at Winterail, including Ted Benson, Dave Styffe, Gordon Glattenberg, Hank Graham, Tom Gildersleeve and Richard Sugg.

Between sales I managed to snap a few photos of authors, photographers and other notables who stopped by the table. Here's a sampling: 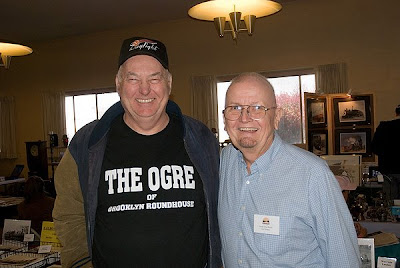 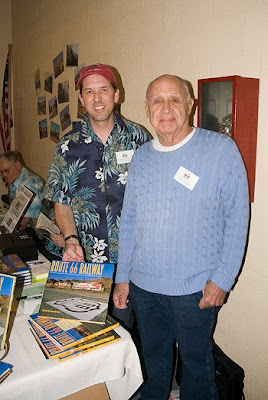 El and Gordon Glattenberg, who photographed many of the 66 book's vintage color images. 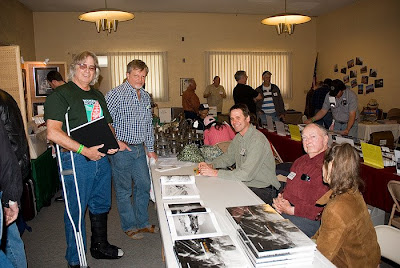 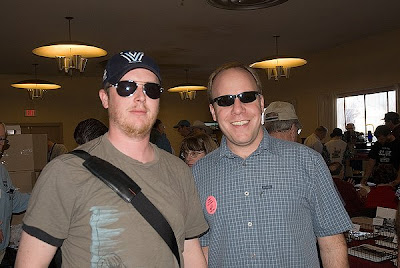 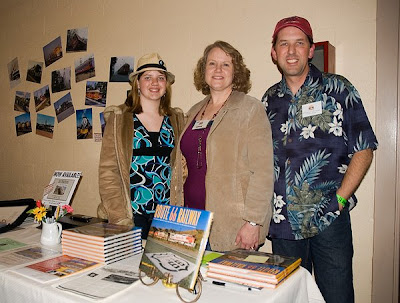 The family that sells together . . . Kat, Laura and El in a quiet moment.

The following day Ted, Dave Styffe and I caravanned up to the California State Railroad museum in Sacramento to see Jim Shaughnessy's photo exhibit and book presentation. Both were well worth the drive north, and photographer Scott Lothes was kind enough to take a group portrait.

Dave also updated his famous "Top ten lies told at Winterail" list this year. Not to steal his thunder, but highlights include:

If you're on Facebook, visit his profile to read the full list . . . hopefully they will appear on his Unauthorized Observer blog. I'm just glad that Lie No. 10 no longer applies to me: "My book should be ready next year."

Coming next: photos from the book signing trip to Southern California.
Posted by Elrond Lawrence at 2:07 PM No comments:

To the Frakking End 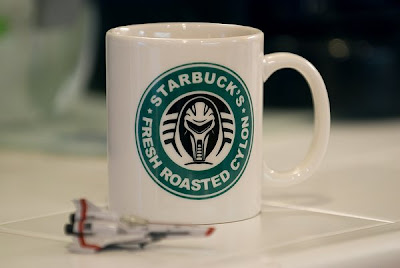 So many things to write about, and so little time . . .

We just came off a fantastic Winterail weekend, and I'll be posting pictures soon -- plus photos from the great southern California mini book tour. But that needs to wait for a day or two. Tonight I'm saying goodbye to the best show on TV: Battlestar Galactica.

Five years ago, I never dreamed I'd be saying those words above. All I remember then was the news that Ron Moore (a former Star Trek showrunner) was planning a "reboot" miniseries of the 1978 classic -- OK, "classic" may be a bit much, but for us kids swirling in 1970s Star Wars-mania, it was like getting a weekly fix of a galaxy far, far away. So what if the good guys were on the run and the bad guys looked like walking toasters? The ships were awesome and the characters were cool. And who's going to argue with Lorne Green as Commander Adama?

Take an FTL jump to present-day, and I can't imagine 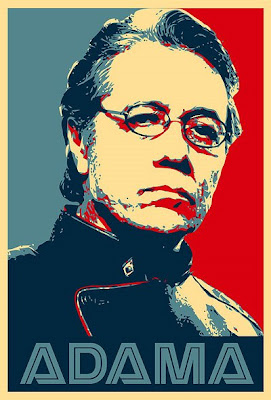 anyone other than Edward James Olmos as the great Admiral Adama. But the entire cast is amazing . . . as are the writers, who have redefined sci-fi with stories about war, politics, terrorism, sex, religion, and more. BSG is the only show that's truly tackled our post-9/11 world, and every week it asks the tough questions: are we worthy of survival? How far do we push our values and morals in the name of survival, without losing what makes us human?

Oh yeah, and then there are mind-blowing space battles, scary metallic Cylons and humanoid Cylons that look like supermodels. There's also Bear McCreary's amazing music, maybe the best EVER in television. (Check out his first-class blog HERE). And of course, there's "frak," the greatest curse word in TV history.

BSG "does bleak well," as one critic has said, so it's not for everyone. Eddie Olmos and Mary McDonnell are routinely robbed of Emmy nominations (she plays President Laura Roslin, the former secretary of education who becomes president after a sneak Cylon apocalypse). Heck, the show won a Peabody and countless other awards, yet the Emmy crew plods along in clueless bliss. But this isn't the time to dwell on such matters. 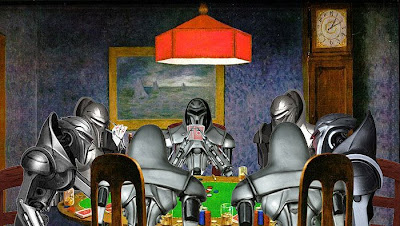 Bluffing is pretty much pointless

BSG is about a family that's born amid the worst of times, and how they hang onto each other to keep hope alive. These characters -- Apollo, Starbuck, Col. Tigh, Baltar, Helo, Sharon, Six -- have become real to me, and I've laughed and cried with them for five wonderful years. The best shows know when to quit, however, and now it's time to say goodbye. I have a feeling that BSG's legacy will last for decades, long after other shows from the era are forgotten. It's been a frakking good ride. So say we all.

Public relations, Galactica style, at the HRmarketer.com blog:
Messaging and Mutinies
Posted by Elrond Lawrence at 8:18 AM 1 comment: 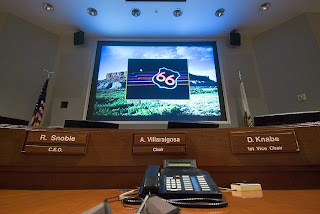 No, Los Angeles Mayor Villaraigosa didn't make the show, but I couldn't resist the view.

I know, it's been a few months since the last blog post, but it's been a busy winter. First up was the completion and debut of the new "Route 66 Rails" program -- an 18-minute show based on the Route 66 Railway book. It looks like I'll be playing every Rotary and Kiwanas Club meeting between Salinas and Monterey, but hey, they keep inviting me . . . February 28-March 3 saw the first mini "book tour" in my old stomping grounds, with signings and/or talks in downtown LA, Pasadena, and San Bernardino. What an amazing six days: the books sold well, the shows ran smoothly, and people stayed awake! It was a great homecoming, topped off by some wonderful reunions. Watch for photos soon.

Next up is Winterail on March 14, where the show will get its biggest screening yet. Laura and Kat will be joining me in lovely Stockton, and we'll be selling books in the dealers room. Be sure to stop by and say hi.

The recent blitz of events pretty much killed my blog writing, but a rebound is around the corner. For now, this sums up the current sad state of affairs:

Pass me another Moretti!

Posted by Elrond Lawrence at 10:05 AM No comments: