Memories and Magic at Manzanar 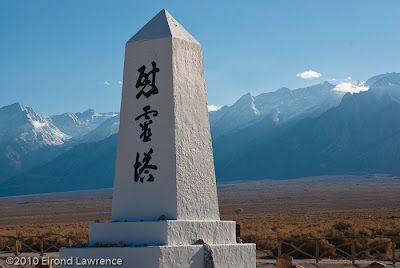 In early October, the Lawrences piled into the Escape and took our first driving vacation down U.S. Highway 395. Amazingly, this California native had largely ignored U.S. 395 during the past four decades (many jaws have dropped when hearing this little factoid!). We started at Carson City, Nev., and ended in Hesperia, Calif, where the highway joins with Interstate 15. After driving the route from top to bottom in California, I stand at the roadside altar begging forgiveness. Highway 395 is a marvelous trip filled with staggering scenery and quirky towns, evoking many of the same thrills as Route 66. As time allows, I'll post mementos from our favorite stops: Bridgeport, Bodie, Bishop, Lone Pine and others.

Really, it's a no-brainer to choose the best day of the trip, the moment where U.S. 395 captured our hearts. North of Lone Pine, a deserted camp in the Owens Valley recalls one of the darkest times in America's history: Manzanar, a war relocation center where over 10,000 Japanese-Americans on the West Coast were interned during World War 2. Now a National Historic Site, Manzanar sports a visitors' center fashioned out of the old auditorium, along with replicas of the living quarters and a stirring memorial at the cemetery grounds, framed by the Sierra Nevada range (top photo -- click all photos to enlarge). 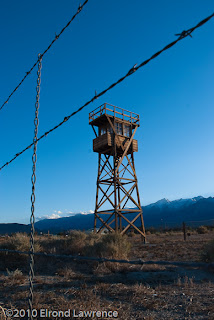 A stop at the visitors' center is highly recommended, but be ready to encounter a United States consumed by fear and racism. Be ready to face the raw emotions of a time when the Land of the Free singled out nearly 120,000 people, stripped them of their civil rights, and herded them into remote camps. Two thirds of all interned Japanese Americans were U.S. citizens by birth. But after Pearl Harbor none of that mattered. Political spin was as insidious in 1942 as it is today: survivors recall being told that the relocation was for their own "safety" . . . then upon arrival, they saw guard towers manned by military police with submachine guns, pointed inside the camp.

If the visitors' center doesn't move you, take the driving tour around the remains of the camp. Stop at the memorial and walk in silence as shadows spill across the Sierras. If you're lucky you'll encounter living history, as we did that October afternoon. 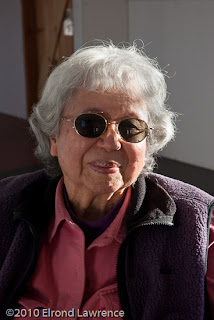 In a stroke of serendipity, we stumbled upon two replicas of the barracks buildings, reconstructed in 2010 to represent the living quarters of Manzanar internees. While exploring the barracks, we noticed a park ranger touring an elder Japanese couple. To our delight, ranger Carrie Andresen seized the moment and introduced us to her VIP guests: Grace and Yosh Nakamura, both survivors of internment camps.

Grace had lived in Manzanar, arriving as a teenager in May 1942. She told us how the family scrambled to take care of their belongings when the government ordered all Japanese Americans to evacuate the West Coast. A week later, they boarded a Southern Pacific train in Los Angeles with hundreds of evacuees; shades were drawn on the windows and no food or drinks were served. Her lasting image from that day was of a young family, the mother juggling two toddlers and baby twins -- all four crying -- and the father carrying two oversized suitcases with blankets and diapers strapped to his back. 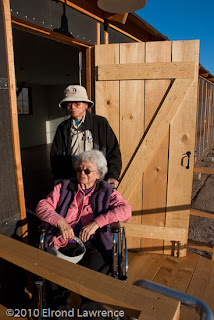 Yosh and Grace pause at the entrance to a barracks replica.

Gesturing around the barracks, Grace explained the flimsy design of the original living quarters. Wind and dust were a constant presence, slipping through the tar paper and floorboards. Before linoleum and benches were installed, schoolkids sat on the floors and strained to see their fellow classmates through the dust. Grace's seven-member family included her younger brother, 12-year old Larry Shinoda, who became a camp sensation when he designed reclining back chairs for their mother and grandmother. Larry grew up to be a world-famous auto designer, best known for the 1963 Corvette Sting Ray.

Grace also witnessed the infamous "Manzanar Riot" of December 1942, when internees learned that government employees were stealing their food. They formed a huge protest and tensions quickly escalated. Grace, a spectator, watched in horror as the military police opened fire on the defenseless crowd, killing one of her classmates. Two were killed that day and 10 were wounded. 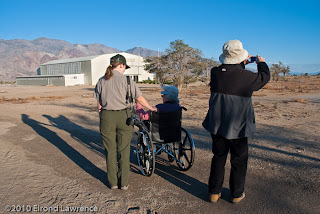 While walking back to the auditorium/visitors' center, ranger Carrie Andresen and Grace pause while Yosh lines up a picture.

Grace, Larry, and the family finally left Manzanar in 1944, heading to Colorado where they joined relatives who had escaped the camps by leaving California. She eventually returned to her home state when she received a scholarship to the University of Redlands. Grace was the first Japanese American college student to return to California. After graduating with honors, she began teaching in the Pasadena School District and was the first Japanese American hired after the war. Two Masters' degrees later, she continued her teaching and fine arts career and welcomed three children with husband Yosh, a college art professor. As Grace writes in her "ID card" biography on NPS' Manzanar Web site, "I remain a teacher, learner, and helper to others." 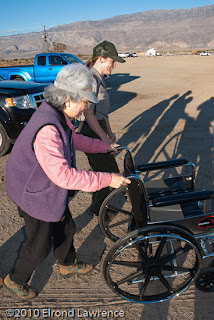 A stubborn rut in the pathway spurs Grace to action, rising to help push her own wheelchair, despite Ranger Carrie Andresen's best efforts. Carrie: "Are you sure you don't have a little German in you, Grace? Because you're as stubborn as me." 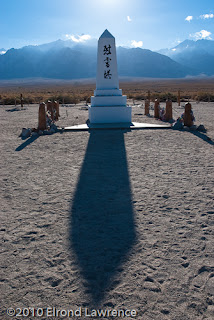 For me, these two images capture the spirit of Manzanar and that amazing day. Above, the shadow of the cemetery memorial pierces the earth, symbolizing the wound that a nation inflicted upon its own people. Yet the monument rises into the sky, a spirit of forgiveness triumphing over hatred and fear. Below, Yosh guides Grace past the barracks, a study in love and optimism that endures nearly seven decades after Grace's first visit to the Owens Valley. Their visit was drawing to a close as the western sun eased behind the Sierra Nevadas, but the legacy they shared will last in our hearts forever. 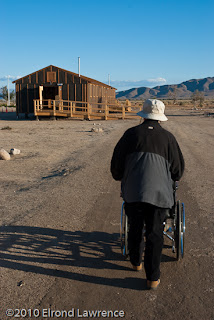 Dark side of the moon . . . taken from our backyard deck in December 2010. (click to enlarge)
It's a new year and another try at regular blogging. You think this would be a breeze for a person who's a writer, but PR clients, family obligations, and church commitments were major distractions in 2010 -- not to mention that insidious timesuck called Facebook. So OIA (our society demands acronyms for everything, ya know) has been cooling its heels since the summer.  But recently I was shamed into taking action by talented friends like Scott Lothes and Nick Suydam who are sharing some terrific work. I'll start off with a single image, a view of the lunar eclipse on December 23, 2010. It's one of my final photos of 2010 -- a nice capper to a great year that included a new house, the sellout of Route 66 Railway, and the Giants finally winning their first World Series in San Francisco!!

Best wishes for a happy 2011, and watch for another post very soon.
Posted by Elrond Lawrence at 11:44 PM No comments: