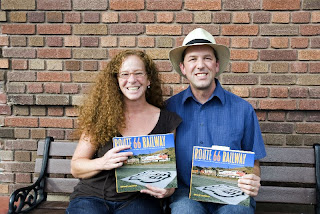 Gillian Ferris Kohl of KNAU-FM and I pose for a post-interview photo at the Flagstaff Amtrak station in September. To hear the NPR radio interview online, see the link below. (Ken Rattenne photo)
The holidays are upon us and it's time for a shameless plug. The Route 66 Railway book is slowly approaching the end of its first printing -- I can't believe it's been over a year since the release!
As with any small publisher, distribution has been a chief obstacle. Most sales have come with little help from the big chains (we're looking at you, Barnes & Noble! At least Borders carries the book in a few stores). A national distributor has expressed interest in selling R66R, but unfortunately it's been a slow process working out the details between them and LARHF, the book's publisher.
Needless to say, the past 13 months have given me a real education about the publishing industry and the trials of getting noticed without a major publisher. However, the response to R66R has been extraordinary and I greatly appreciate everyone's support.
So, if you know someone who needs the perfect holiday book (hint, hint, wink wink), send them to http://www.66rails.com/, which was updated today with new retailers in California, Arizona, and online. It's only a partial list, of course. Signed copies are also available -- email me at elrondlawrence(a)surfbest.net for details. Merry Christmas and Happy Hanukkah.
ON THE RADIO: In September, NPR affiliate KNAU-FM in Flagstaff did an interview about Route 66 Railway at the ex-Santa Fe passenger depot. The 4-minute radio interview can be heard at the 66rails site, but here's a direct link just in case: http://tinyurl.com/lm2kd9. (Be sure to read the introduction before playing). Thanks to reporter Gillian Ferris Kohl for a fun afternoon and to KNAU radio for their support! Thanks also to friend Ken Rattenne for filming the unedited interview on his cool HD camera. 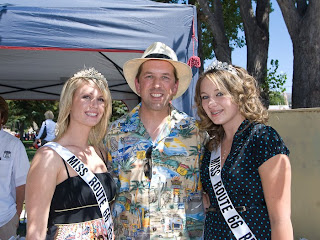 PHOTO-OP: While at the annual "Route 66 Days" event in Flagstaff, Ken snapped this portrait of yours truly with lovely "Miss Route 66ers" Hillary Ekstrom (left) and Darian Burns. If only we could add thought balloons . . . you'd hear something like:

Posted by Elrond Lawrence at 2:17 PM No comments:

No. 43 and Looking Ahead 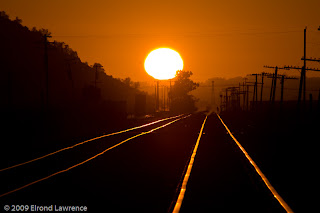 Union Pacific's Coast Line near Aromas, Calif. - August 2005
(click to enlarge all photos)
Birthday #43 has come and gone, and it seems like a good time to make a few new year's resolutions (January 1st can't have all the fun, right?). Priority no. 1 is very short term: finish a Coast Line feature article for the NRHS Bulletin magazine... this frakking piece has been in suspended animation longer than the astronauts in Planet of the Apes! As of this writing only 300-400 words remain before the 16-page opus is a wrap. It's my biggest article since the book, and it's good to get the rail journalism juices flowing again.

Next: more frequent blogging. Between Twitter and Facebook, I could easily get spend months dispatching bursts of 140-character prose and eventually succumb to full-blown writer's ADD (friend Dave Styffe swears that FB should be called Timesuck). Either service makes a blog post feel like an epic. It doesn't help that I've approached the last few blog entries like mini-features, complete with the usual procrastination that accompanies any magazine project. So the new goal is shorter, more frequent entries. Seeing how this post began Nov. 19 and went live Nov. 24, I'd say there's nowhere to go but up. :-)

A quick aside: tonight my Epson V700 scanner was acting up while trying to scan some old Kodachromes, and in a desperate attempt to jump-start the thing I grabbed a photo from a small stack of prints. Who would have guessed that it was a vintage birthday snapshot? But lo and behold, here is yours truly with my mom and dad, Jill and Chuck Lawrence, at our home in Fontana during the early seventies. 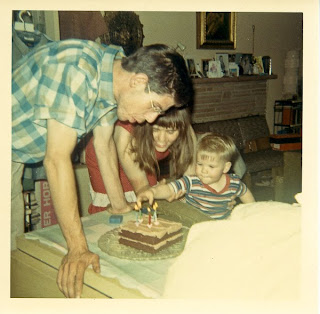 This year it took a bit more effort to douse the birthday candles . . . 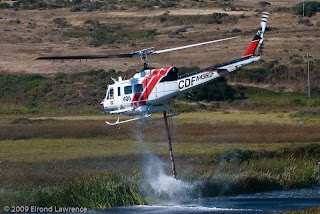 Since this is fast becoming another epic, I'll sign off. It's time to get back in the saddle. A personal symbol of hope is this sunset view of Mecca, California, near the Salton Sea, on a night when things weren't going well. The next day brought a drastic comeback filled with photographic surprises. So this is a reminder of resolution no. 3: to keep looking forward. Happy Thanksgiving! 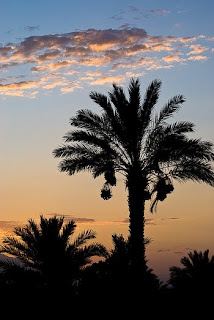 Posted by Elrond Lawrence at 10:58 PM No comments: 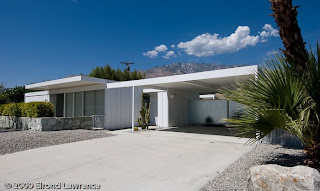 Alexander Steel House, blt. 1961, by Donald Wexler (click all photos to enlarge)
There's a movie making the rounds on the independent film circuit called Visual Acoustics: The Modernism of Julius Shulman. I haven't seen it yet -- it shows around the country in week-long engagements -- but whenever I follow its progress, I can't help but think back to a Southern California road trip last July. While scouting out ideas for a new book, I ended up in Palm Springs for a night and had an encounter with Julius Shulman . . . even though I never met the man.
One of the leading architectural photographers of the 20th century, Shulman and his pictures played a major role in crafting the image of Los Angeles, Palm Springs, and the “Southern California lifestyle” to America and the world during the 1950s and 1960s. Until this spring, I barely knew Shulman's name and recognized only a few of his landmark images. That all changed thanks to an NPR story that opened my eyes to the "modernism" movement and his incredible body of work.

So when I made a unexpected detour into Palm Springs and visited the Orbit In (see last post), Shulman was on my mind. I was hunting for the mid-century modernist architecture that he helped make famous, and I quickly learned that Palm Springs is Nirvana for modernism fans. The visitor center resulted in some great tips and a $5 map of the city's restored homes, motels and other architectural gems. Was that $5 well spent! I made my way to historic steel structures designed by Albert Frey, William Krisel, John Lautner, Richard Neutra and other giants of the time. 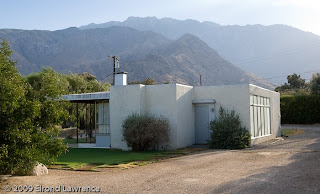 Grace Miller House, blt. 1937, by Richard Neutra
That evening, after dinner, I walked along the city's own "Walk of Fame" -- and the first Hollywood-style star I found bore the name Julius Shulman. I stayed there for a few moments, appreciating the serendipity of finding this roadside legacy. Then I moved on, ready to escape the hot summer night. 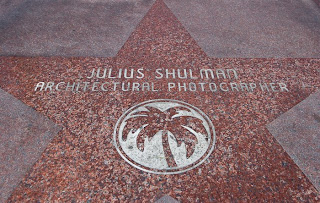 Shulman's star on the Walk of Fame, Palm Canyon Drive
Waking early, I spent the morning capturing more Desert Modernism landmarks; eventually I ended up back at the city's distinctive visitor center (the former 1965 Tramway Gas Station). During a nice conversation with a book buyer regarding Route 66 Railway, I mentioned Shulman and how he and the city had inspired me on this journey. His face suddenly changed.

"You do know that he died last night?"

At 98 years of living the fullest life imaginable, Julius Shulman had passed away in Los Angeles . . . and for all I know, it happened when I was gazing at his star in the desert town forever linked to his work.

In Shulman's LA Times obituary, this quote stuck with me: "Modernism really was about a belief in a promising future, a belief that our problems could be solved easily by progress," said Craig Krull, whose Santa Monica gallery represents Shulman's work. While I can't quite agree with progress being the sole savior of our ills, optimism is something that comes through loud and clear in Shulman's elegant images. As 2009 nears its end, we need all the optimism we can get. 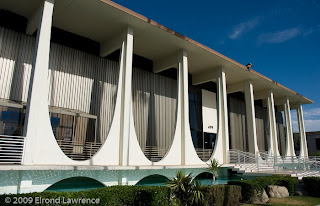 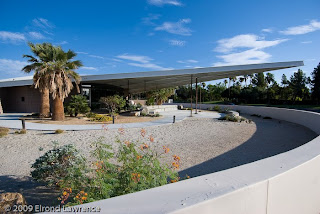 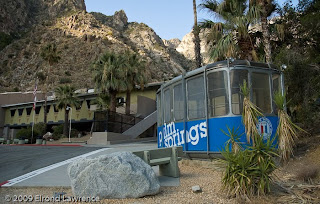 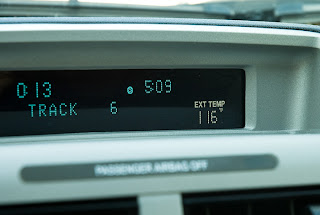 Posted by Elrond Lawrence at 10:47 AM No comments: