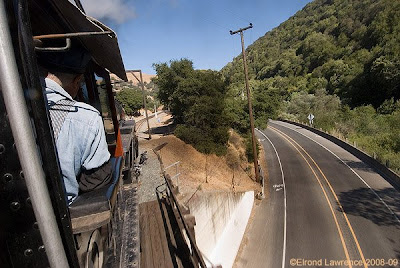 Southern Pacific 4-6-2 2472 crosses State Route 84 in Niles Canyon, Cal., on August 31, 2008. (click to enlarge)
Honestly, I've been meaning to do this for over a month. The original plan was to do it January 1. Now I'm just happy to get it done in January! Last year I posted a "Rogue's Gallery" of my favorite photos from 2007, so I thought it would be interesting to see what images topped the list for 2008. Dave Styffe did a top 10 post last December that features some outstanding photos; unlike me, he had the presence of mind to do it before the year ended!

2008 was a watershed year, to say the least, with the completion and release of Route 66 Railway. Ironically, between the book launch events and private sales, I had less time to get out and do much shooting during the final 3 months of the year. So I went through the digital files with a little uncertainty, wondering if there would be enough good material to fill 10 slots.

To my surprise, I ended up with 16. Don't panic -- I'm not including them all! I edited the list down to 11, mostly railroad-related stuff. I may post a follow-up later on (hmm, with my track record that should appear around Memorial Day). :-)

One trend that was immediately obvious was that I'd shot far more steam than usual this past year, more than the past several years combined. Between Santa Fe #3751's LA-San Diego trips, Southern Pacific #2472's Niles Canyon excursions, and the Sierra Railroad's Winterail fantrip with McCloud River #18, it was an amazing year for California steam fans. The SP 2472 images benefit from the all-access pass I enjoyed while working on a Classic Trains article about the Niles Canyon Railway (shameless plug: it's arriving now in the Spring 2009 issue).

But these aren't limited to steam, as you'll see below. With that said, let's get on with the show (click to enlarge): 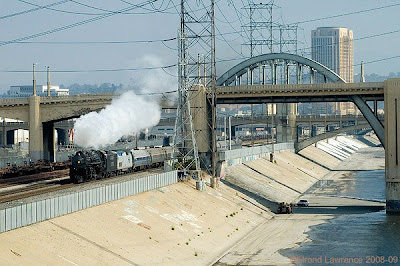 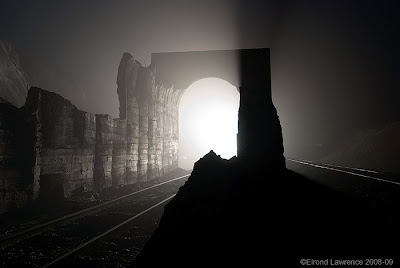 Like a scene out of Spielberg's Close Encounters, an eastbound BNSF freight rolls through the ruins of Tunnel 2 in Cajon Pass on March 1. At right is the new third mainline that triggered the daylighting of the Cajon tunnels. This image was one of two that helped score a bronze award by the Center for Rail Photography & Art. 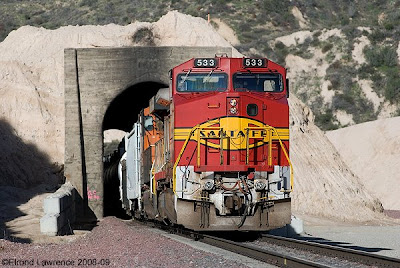 The next morning, tunnel 1 resembles a toy tunnel as the heavens aligned and a Warbonnet helper was positioned perfectly for the morning sunlight. 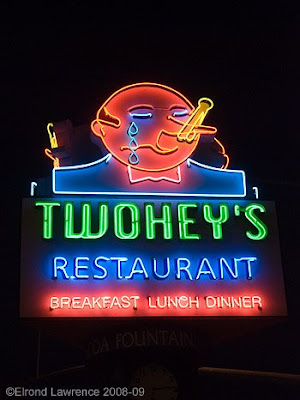 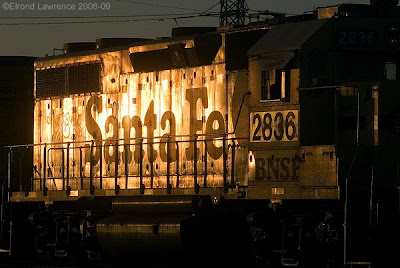 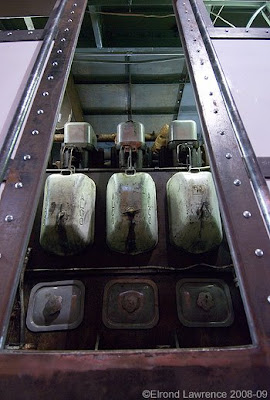 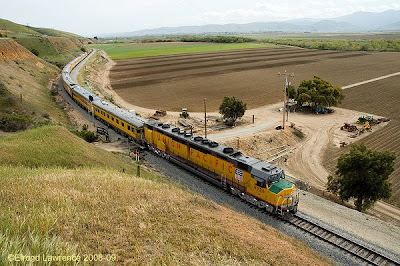 A Centennial is always going to make the cut . . .
UP 6936 leads a northbound special up the Coast Line at Harlem, Cal. 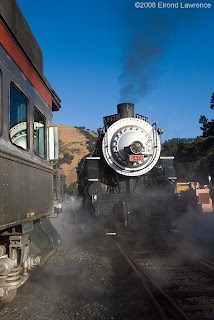 In a surreal morning on the Niles Canyon Railway, SP 2472 backs past
the Oakland business car at NCRY's Brightside yard. 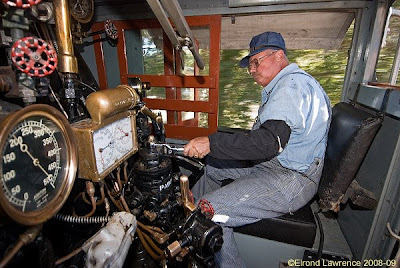 Errol Ohlman fires the 2472 up the Niles Canyon grade . . .
my first serious cab ride aboard steam. 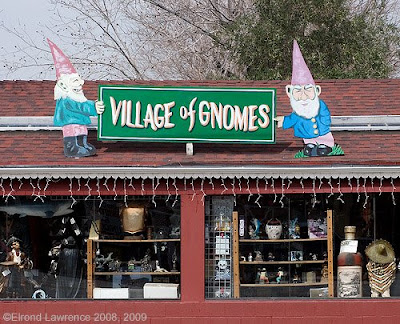 It wouldn't be complete without one quirky roadside shot: Highway 138, Littlerock, Cal. 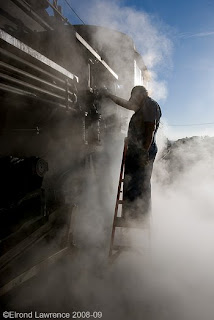 Hope you enjoyed them! I'll do my best to keep the blog machine rolling in 2009.

Posted by Elrond Lawrence at 5:27 PM No comments: 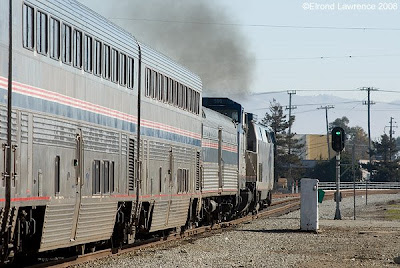 What a year. Fall 2008 can pretty much be summed up by the book's arrival, book sales, book PR, and the holidays (oh yeah, and those pesky PR clients). Many people are all-too-happy to shove 2008 out the airlock -- understandably so, for those beaten down by the financial collapse -- but I'll always look fondly on the year that Route 66 Railway finally came to life. Thanks to everyone who gave R66R such a warm welcome, and for helping make the past three months truly special. 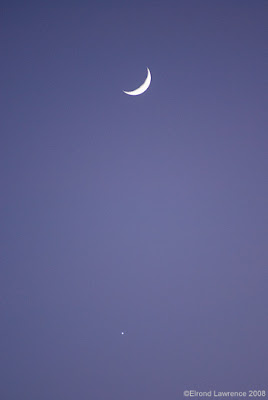 The final photo of the year: the moon and Venus, seen from Aromas, Cal., on New Year's Eve.
I'm off to a "First Fridays" reception tonight at Salinas' restored Railway Express Building. In the next few days I'll post favorite photos from the past year. And maybe I can settle into a regular posting schedule for 2009 (we'll see).
Posted by Elrond Lawrence at 3:20 PM No comments: